Slavoj Žižek owes us an anti-Trump book, and this is why

I know that at this point in history most of us would rather binge-watch Ted Cruz’s infamous twenty-one-hour riff on Green Eggs and Ham, Duck Dynasty, the WWF, and great hamburgers than spend one more second thinking about the 2016 Presidential election, but humor me? Just this once? The thing I wanna talk about isn’t terribly huge. In fact, it’s really just one miniature clusterfuck of infamy in an election that broke the scales for indignity, depravity, grotesquerie, and straight-up malice, but I think it bears remembering. It involves everybody’s favorite slovenly, Lacanian, Hegelian, Slovenian, Marxist philosopher-cum-political-pundit: Slavoj Žižek.

Let me set the scene. After being revealed as a brutish, pussy-grabbing asshole, and after having Hillary Clinton deliver his ass to him in three consecutive debates, Donald Trump seemed to be on the verge of being sent back to his gold-plated penthouse to scarf the sad taco bowl of defeat. But, like a hardy venereal disease that’s just a little bit stronger than your penicillin tabs, he wouldn’t leave. As October ended, he was inching back in the polls, and a largely complacent, self-assured Democratic party had to face the fact that the presidential race was a little closer than it should be in any sane universe. Then there was James Comey’s bombshell: Hillary’s emails were back under investigation. Uh, maybe. Kinda? Whatever, it was enough to get Hillary another drubbing in the news cycle and to set all the spittle-lips on Fox News to full froth. Suddenly, the unthinkable self-immolation that America was oddly curious to experience was a tad bit too close for comfort.

And it is here that we turn to Žižek. With all of liberal America biting its nails and sipping a prophylactic fifth of Jameson, Žižek stepped forward to confidently endorse a Trump Presidency. Yes, just days before the election, he told UK Channel 4 that if he could he would absolutely vote Trump. True, Trump “horrified” him, but Hillary was the real danger.

In retrospect, all the signs of Trump-curiosity were there. In late April Žižek was surprisingly calm about Trump, claiming at a public event arranged by the Guardian that “if you extract his total racist and sexist stupidities… [Trump] is really a centrist liberal.” By June he had refined his message (check the MHP t-shirt in the video!) into an argument that Trump’s racist, xenophobic, misogynistic, ableist, idiotic, insulting, head-vein-throbbing, and vaguely Hitlerian campaigning was good in the sense that it revealed the hidden decay at the heart of American politics. From there, Žižek continued his off-puttingly benign musings on Trump, eventually adding to the obvious injury—that pre-election endorsement—the insult of his horror at Bernie Sanders’s endorsing Hillary Clinton, a moment Žižek likened to Occupy Wall Street stumping for Lehman Brothers. Clearly, a Hillary presidency would manage to consolidate all points on the political spectrum, once again shutting out any true revolutionary voices and leaving us shoulder-deep in  all-purpose, no-labels, centrist, triangulated-to-death political slurry.

So, better to have a human ulcer open up the soft and gentle flesh of the White House than to endure four more years of business as usual! Of course, we all know how that ended. The ulcer is there, leaking all over the rule of law, immigration, health care, the Emoluments Clause of the Constitution, the Supreme Court, and both houses of Congress, not to mention our allies, the FBI, and God knows who else. Žižek has gotten what he wanted, and it’s arguable that after four life-shortening months Trump has more or less fulfilled the promise the philosopher set for him. America is completely horrified! People are re-engaging in politics in record numbers! We have at last seen just how bad things can get! (Although it is worth noting that the Breitbart/Fox News/Infowars wing of the Republican party has thus far failed to get the memo and apparently never will.) Fine. Žižek’s point has been made. Well then, at the very least he owes us a goddamn book on this bleak new reality we all have to live with. 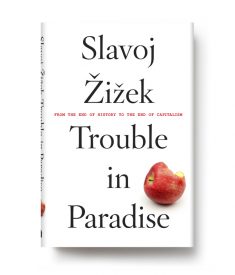 I’m going for more than a laugh here. I really do think Žižek has a Trump book in him, and we have every reason to believe it would be outstanding. Over the months of the presidential election, Žižek’s clear fascination with the Trump phenomenon led him to drop metric tons of public verbiage about why the West not only wanted but needed Trump—this is clearly the kernel of a book-length effort.

Moreover, much of Žižek’s political writing prior to 2016 has longed for exactly such a development as Trump. Recall one of Žižek’s most famous quotes: “It is easier to imagine the end of the world than it is to imagine the end of capitalism.” This generally glosses as “We’re all so hardwired to believe there’s no other possible global order than capitalism that we’re more capable of imagining the destruction of all human life on Earth than the end of the current system,” and here lies, really, the deep-seated fear/wish at the heart of Žižek’s political philosophy: he desperately wants capitalism to end—indeed, he has argued for years that it can do nothing else but die a terrible, fiery death — but he also clearly fears that capitalism has achieved such dominance over our imaginations that nothing short of an apocalyptic development will restore our ability to engage with politics afresh. While Trump is surely not the exact End Times Žižek has kinda, sorta been rooting for, he is the closest thing to a genuine political Armageddon that we have seen in U.S. politics in decades, and he more or less begins to fulfill Žižek’s hopes for the demise of capitalism.

Recall also that much of Žižek’s philosophy revolves around a longing to rip the mask off of postmodern, “end of history,” technocratic decorum. One of Žižek’s most beloved bits is a close reading of the alien invasion B-movie They Live!, wherein a shocked “Rowdy” Roddy Piper one day finds a pair of sunglasses that lets him see the hidden reality behind appearances: what seem to be normal, decent human beings are really malevolent aliens that have taken over Reganite America under disguise. Žižek reads this as an apt metaphor for the ways ideology has been used as a handy disguise for the true evil lurking at the heart of liberal democratic politics: it makes us think these policies are decent, the best possible option our consensus-needing system can hammer out, when really, if we look just past the talking points, these policies are a malevolent invasive species hellbent on pillage and enslavement. Of course, there’s no better cure than to give us all ideology-penetrating sunglasses that let us see the horrible truth. Clearly, in Žižek’s mind Trump is just that: a racist, nativist, misogynistic, blatant idiot who will let everybody see just what a horror show our democracy has become.

And then there are Žižek’s two recent Melville House books — both of which investigate the conditions that have unwittingly made Trump possible. In 2015’s Trouble in Paradise, where he both implicitly and explicitly tells us that he remains a true believer in capital-c Communism, Žižek basically rips apart all of global capitalism’s and gently implies that the left needs to find a better solution than neo-liberal governance before things start to get really bad. Whatever else it is (and it really is very many things) Trouble in Paradise is a lacerating indictment at all of the problems capitalism is failing to solve in the world today, as well as a description of the internal contradictions that make these problems unsolvable in our current system. It even includes an incredibly prescient line, which, if this isn’t a prediction of the coming Trumpocene Era, I don’t know what is: “A new Dark Age is looming, with ethnic and religious passions exploding, and Enlightenment values receding.” 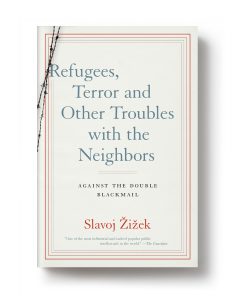 Žižek continued this path with his 2016’s Refugees, Terror and Other Troubles with the Neighbors, which deals with the “double blackmail” implicit in both of the “solutions” generally being offered to the refugee crisis: open doors and high walls. Again, the relevance to Trump’s appeal is clear: with the West largely failing to solve the problem of immigration (a problem that in many ways it created with colonialist and neo-colonialist ventures), the stresses and clashes created by a chaotic system of immigration—which has lent itself to easily- stoked fears of a malevolent “other” coming to snatch the American way of life—played directly into Trump’s blatantly racist promise of an “America First” regime. (Election post-mortems have indeed showed that such racism was a leading factor.)

Clearly, Žižek has been writing toward Trump for years now, and, just as clearly, Melville House would be the correct press for this work. I envision Žižek’s Trump book (or books) as dispatches from the modern political hell we’re all now living in, pumped full of Žižek’s signature blend of Lacanian psychoanalysis, Eastern Bloc black humor, readings of pop culture, Marxist theory, and — of course — unforgettable one-liners. That is to say, something in the spirit of Žižek’s other Melville titles would be perfect.

Moreover, Melville House has already taken a leading role in anti-Trump publishing. First there was The Making of Donald Trump, where the Melville House team managed to coax longtime New York Times Trump reporter and Pulitzer-winning journalist David Cay Johnson to write a Trump bio in a matter of weeks. Then there was What We Do Now, a progressive crash title envisioned in the day after the election and put together in defiance of the Trump disaster. I have no doubt that there are more such titles on the way, and there’s simply no excuse if Žižek isn’t among them.

Scott Esposito’s fourth book, The Doubles, is forthcoming from Civil Coping Mechanisms. He writes a column for Literary Hub on how the humanities can make enduring the Trump Era slightly less awful, and his essays, reviews, and interviews have appeared widely, including as an afterword to Heinrich Böll’s The Clown, published by Melville House.