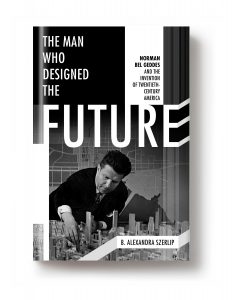 Today we publish The Man Who Designed the Future, B. Alexandra Szerlip’s look at the life of design impresario, futurist, and jack-of-many-trades Norman Bel Geddes. By the time of Bel Geddes’s death in 1958, he had already laid much of the blueprint for the next hundred years; he’d designed sets for Cecil B. DeMille, casings for some of the earliest computers ever built, advanced highway systems, and much more. He practiced, as Szerlip writes, “a vocation that, as yet, had no official name.”

As you sit on the train to the bookstore, here’s an excerpt lightly adapted for continuity, in which Szerlip describes the construction of one of Bel Geddes’s best-known—and most impactful—designs: General Motors’ legendary Futurama exhibition at the 1939 World’s Fair, which offered visitors an immersive ride through the technologically advanced American city of the year 1960 — and which continues to resonate across America’s urban imagination today.

The old Cosmopolitan Motion Picture Studio, once the site of numerous Marion Davies shoots, occupied a large block at 126th Street and Second Avenue. It was here, on three rented floors, that Futurama (now with a capital “F”) and the rest of Highways & Horizons, GM’s World’s Fair pavilion, took shape.

Given the extremely tight deadline, exhibits were designed in order of importance and size. A twelve-foot-square wooden model of the entire site was constructed so that progress could be kept track of in three dimensions.

At seven o’clock each evening, the model department received the day’s blueprints and an all-night shift set to work. By 10:00 a.m., new developments and corrections had been built in and painted yellow; previously approved work was white. As Norman made corrections, the affected parts were numbered in red. By noon, these had been added to the drawings and, by evening, to the model. All corrections were recorded with a Dictaphone. Nothing was left to chance.

Futurama’s 408 panels were arranged on individual twenty-by-five-foot tables at four-foot intervals, so the thousands of technicians, draftsmen, carpenters, and model makers could move around them. (The tables were mounted on iron pipe, the legs threaded so that they could be inclined or leveled, and aligned to hairline accuracy by a turn of a joint.) Each panel had a number and a work progress card of twenty itemized steps. After one employee got lost amid the labyrinthian arrangement, florist-turned-project-manager George Wittbold had red arrows painted on the walls that read THIS WAY OUT.

“At the moment we have 200-and-some draftsmen, between 400 and 500 carpenters and about 25 sculptors,” Norman wrote to his wife Frances, who’d headed up the Vegetation Department on the Shell model, “plus some 30 people experimenting with ways of making trees,” more than 1 million of them. The exhibit called for eighteen different species, with three different colors for different perspectives. A special moss had been imported from Norway, then chemically treated and dyed. Mountaintop trees, in particular, had to be carefully watched; those more than one foot tall threw off the scale.

An additional 500 crew members were soon added to “locate” buildings and vegetation on the models. (Norman had the satisfaction of out-mastering the master. Frank Lloyd Wright’s twelve-by-twelve-foot Broad Acre model had been crafted by Taliesen interns. Norman’s 35,000-square-foot World of Tomorrow required a team of thousands.) Yet another group tackled geographical surfaces. The skeleton topography layers (including progressively terraced farm areas) were cut from berboard; some of the twelve-foot mountains required more than 288 stepped layers. Plowed fields were made of ribbed corduroy velvet, forest floors of green cork. Forty tons of quick-drying “dope plaster” were used for ground color. “The stuff used to stuff birds,” presumably excelsior, provided the necessary surface texture. After asking a taxidermist for several tons of it, Norman ended up buying his shop.

The Man Who Designed the Future is on sale now. Buy your copy here or at your neighborhood independent bookstore.

B. Alexandra SzerlipThe Man Who Designed the Future