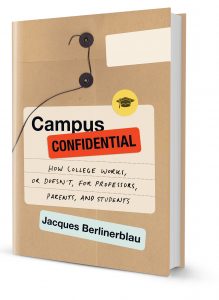 Add Kevin Birmingham’s recent Chronicle of Higher Education essay to your thickening file labeled: “Why It’s Probably Not an Ace Idea to Leave My Job as a Simon & Schuster Marketing Intern and Pursue a PhD In Literature.” The Harvard writing instructor rehearses disheartening facts aplenty about your likelihood of landing a tenure-track job. Should you be among those who actually hit that jackpot, you will have survived a decade of doctoral training, mental health complications, and the macrobiotic fallout of consuming PBR and ramen on a nightly basis.

All humanities PhDs undergo a similar ordeal. Very few are rewarded with decent employment for their efforts. They are destined to become non-tenured professors, or “contingent faculty.” Cobbling together poorly paid teaching gigs at far-flung colleges, these scholars serve as a “surplus labor pool,” an army of “professionally employed pet-sitters.” They are treated miserably, fired at random, denied academic freedom protections; they truly stand as what Birmingham calls “the great shame of our profession.”

The author proceeds to call out the grad programs you’ll be applying to — dark doctoral mills that churn out rookie scholars like they are beef by-products. “If you are a tenured (or tenure-track) faculty member teaching in a humanities department with PhD candidates,” writes Birmingham, “you are both the instrument and the direct beneficiary of exploitation.”

My sentiments exactly. How can a doctoral adviser, in good conscience, train apprentices knowing that at least eighty percent of them will never even get a chance at landing a decent paying job? Birmingham cites a recent MLA study, grimly reminding us that in 2014-2015, 1,183 freshly minted doctorates were competing for 361 tenure-line positions. If you just did the math and somehow liked your 30% odds, please recalculate: those 1,183 were competing not just against one another, but also against underemployed doctorates from previous years snowplowed into the search committee’s application pile.

Those considering a doctorate in the humanities must recall that the market for our wares is dwindling. The percentage of undergraduates majoring in English is down. Way down. Blame it on STEM. Blame it on academic administrators who’ve sold us out. Blame it on American anti-intellectualism.

But blame it on us as well. As a guild, we rarely accord undergraduate teaching the attention it deserves. The best-paid scholars get to conduct research and/or train grad students (for jobs that don’t exist), while harried adjuncts deliver the product to undergraduates. Which brings us to the product itself. Will we ever free ourselves from the Theory Industry’s masturbatory chokehold on the study of literature? Every work of fiction must be phlebotomized. The pathogens of empire, class, race, and gender must be identified. The data must be published in an unreadable journal. Is it a mystery why undergraduates would rather study entrepreneurship? If there is a future audience for literature, let alone professional literary criticism, it isn’t being grown in our liberal arts colleges.

The decision to devote your life to the academic study of literature is a personal one. No amount of exhortation from a fuddy-duddy like me can stop you from doing it. Birmingham’s piece—kind of a prose-based “It Gets Worse” video—draws attention to the very real, very likely consequences of ignoring statistical probability.